Hello All! Fresh off my own wonderfully successful blogathon, I’m back for more- this time as a participant for the Order in the Court Blogathon hosted by CineMaven’s Essays From The Couch and Second Sight Cinema.

Because I was a little bit late to the Jury, I decided to do something a bit different, and write about a Three Stooges short- called Disorder in the Court (1936) (one of my favorites- but my all time favorite short is Mutts To You). 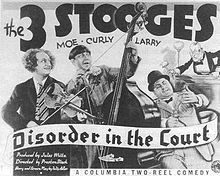 Growing up I probably saw this episode multiple times, as The Three Stooges are my Dad’s favorite (I’m talkin’ all time favorite) and my sister and I would watch with him. So before I go any further, this post is for you Daddy!

Starring Moe, Larry, and Curly Disorder in the Court (1936) is the 15th short the Stooges made together under the brand of “The Three Stooges”. Moe, Larry, and Shemp had made previous shorts together as “Ted Healy’s Stooges”, but the classic shorts we all know and love didn’t begin until 1934 with the short Woman’s Haters.

In the short, the boys find themselves in a serious situation- having to defend their friend, a dancer, Gail Temptest as she is suspected of killing a man called Kirk Robin. Up first to the stand is Curly, but in true Curly fashion, he’s playing both Jacks and Tick Tack Toe in the hallway with Moe and Larry.

The Court is, of course growing impatient, but when they are told Gail’s life hangs in the balance, they rush back- as my Dad always says “those funny men- always looking for a girlfriend!”

With the boys back in the court room, the crazy antics then set in. Music and Dance numbers, mistaken toupee-for-tarantella incidents, a parrot flying out of its cage, and an out of control fire hose are just some of the events happening in the court room (remember this short is only 15 minutes!) 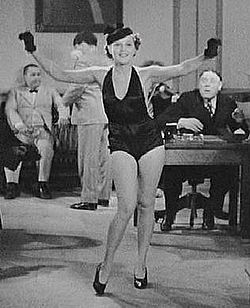 I personally have always enjoyed the music and dance number- gotta love it any time Larry plays the violin! Gail really gets to show off some great moves. The number does lead to Moe getting annoyed- but would a Stooge episode be without Curly being on the receiving some of Moe’s frustrations?

In the end, the boys DO find out who is guilty but not without causing some chaos- still-all’s well that ends well! 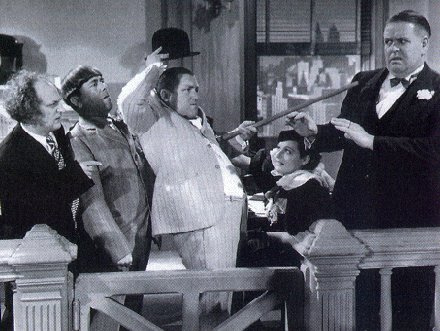 TO FIND OUT THE VERDICT OF THIS CASE CLICK HERE TO WATCH!  (its only 15 min of your time!!)

And with that this Court is Adjourned! Cinemaven- thanks so much for inviting me- I had fun and am looking forward to reading more cases!