Back for another blogathon, this time I’m writing for my good friend Ginnie at The Wonderful World of Cinema for her Sidney Poitier Blogathon.

Fortunately Mr Poitier is still with us, and he is celebrating his 90th birthday- a rare event for anyone! Happy Birthday, Mr Poitier!

I admit I’m not really familiar with any of Poitier’s films but Ginnie is my friend and has great taste in actors, so I gave this blogathon a go. In deciding to do this blogthon, I then watched my first Poitier film, Guess Who’s Coming to Dinner (1967). 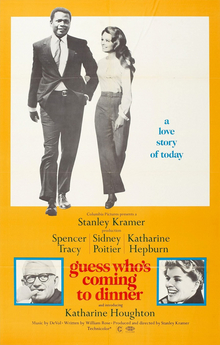 Guess Who’s Coming to Dinner is of course the very final film Katharine Hepburn and Spencer Tracy did together and  Tracy’s last ever film. It also features Katharine Houghton (Hepburn’s real life niece) as their daughter. Sidney plays the fiance to Houghton.

The plot revolves around the engagement of Joey (Houghton) and John (Poitier) and them breaking the news to their parents. The differences in their race causes tensions for both sides, and its a bit of a rocky road before all can sit down for a nice dinner.

This movie may be “dated” in the fact it came out 50 years ago now, but its message remains the same, and continues to inspire a whole new generation, reminding them that love is the most powerful force of all.

I honestly wasn’t interested in seeing this film at first- however, it was very good- and not as ‘political’ as I originally believed it to be. Its a human story of acceptance and overlooking stereotype- ultimately believing in people as individuals instead of as part of a certain ‘group’.

What I liked most about the plot is that it was a very simple plot– parents meet the parents and have dinner- and instead the complications in the movie come from the characters- Spencer Tracy’s character Matt, as well as the parents of Sidney’s character are the ones who have the most trouble coming round to the idea of their children’s engagement and marriage. Even Sidney’s character John is a bit nervous! Katharine Hepburn’s character, Christina is yes, at first shocked, but in true Katharine Hepburn fashion, she ends up being the first supporter of the pending union between the two.

Another aspect of this movie that was done very well were the portrayals of such characters. I think Kate and Spence are always so well matched in their roles opposite one another- but this picture gave them a chance to play an older married couple, and for stars of their status, that type of role was a rare thing back then. It was nice to see them be in an already established relationship without having to get together or find their way back to one another- it was lovely just seeing them be together on screen- and no doubt it gave us a glimpse of their real life relationship.

Tracy and Hepburn aside,  the real stars, however were Houghton and Poitier. They were playing roles that were considered “appalling” for 1967- but as shocking as those roles might have been, I believe they also gave hope and courage to people in similar situations.

Their portrayals even inspire people in today’s world to be mindful and respectful of all types of people from all types of backgrounds- for its not where you come from, it’s about who you are as a human being and where you are going in life that matters.

I enjoyed Sidney’s scenes with Spencer Tracy- when they were outside on the Patio- just the two of them- It was really interesting not only because its these two actors in the scene- but because its so real, the emotion they are conveying- its a bit awkward and a bit tense- but at the same time, its very real and believable.

Spencer Tracy’s speech towards the end of the film also stood out (I know, that’s the cliche thing to bring up about this movie- but it really is powerful) as not only is it about Joey and John’s marriage- it was also a tribute to Katharine Hepburn as well- and from what I know- it was the only time he ever really told her what she truly meant to him- both on or off screen; the tears in her eyes are all 100% real.

In the end, I think I would like to watch more of Sidney Poitier’s movies- I’m gonna have to read posts about No Way Out– I’ve been wanting to see that one! This movie was a real gateway to being introduced to him and his work- and I think its a fantastic way to get into it.