In this Free for all Blogathon, I decided to do a post of what I personally believe to be are hidden gems in the classic film world. I was inspired to write this post due to a conversation I had recently with my high school government teacher (he is also a classic movie person and we have kept in touch all these years!) about how many relatively unknown classic movies that exist out there and how they are unknown but are just as good in quality as some of the big names.

I started thinking that yes there are so many films out there that are the definition of classic- Casablanca, Rear Window, It Happened One Night, The Searchers– they are significant and I absolutely love them- but what about all those other films that get “lost in the shuffle”, if you will; films that came out in between big hits- or that came out around the same time as big hits but got overshadowed.

Which leads me to this list (with a short description)- a list of movies I think are just as good as some of the big names, but aren’t as well known- again- this is my opinion- feel free to disagree, But my main hope is this post inspires others to seek out some other films that maybe aren’t as well known or significant because you never know- some of them may just be super delightful!

I personally thought this was a great Natalie Wood movie and she certainly has great chemistry with Steve! It feels contemporary but still has that classic 60s vibe. 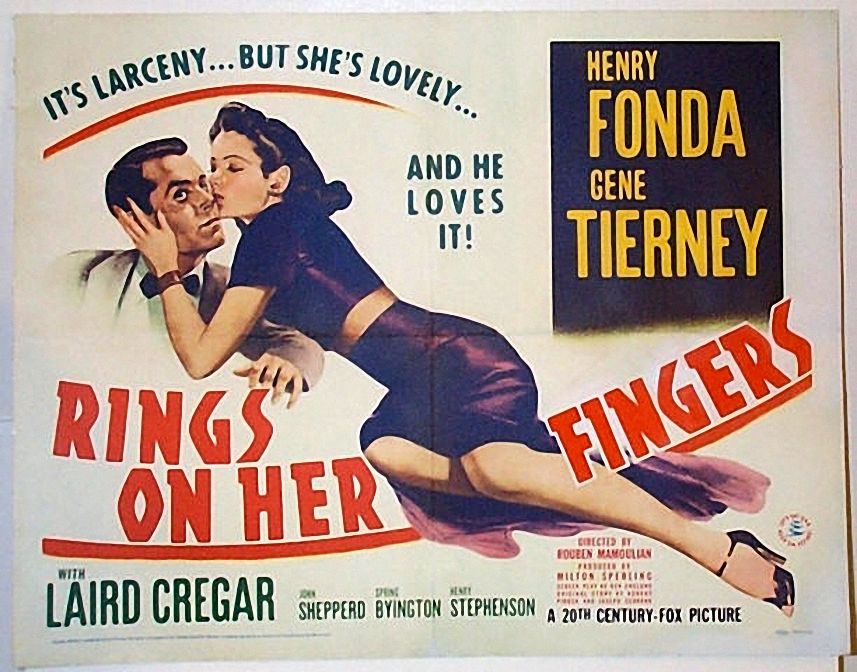 Rings on Her Fingers (1942; Henry Fonda, Gene Tierney)  A sales woman (Gene) at a department store works with two con artists and falls in love with a victim (Fonda) of one of their schemes.

By far not The Lady Eve, but It’s a great Gene Tierney movie and Henry Fonda is charming! It’s just a swell little picture and I need to see the other movies these two made together!

Apartment for Peggy (1948; William Holden, Jeanne Crain, Edmund Gwenn) a depressed professor (Gwenn) whose spirits are lifted when he rents part of his home to a young couple (Holden and Crain)

My post is here if you’re interested to find out my in depth feelings towards this film! But I can say it again- I adore this movie so, so much! From the post war tone to the story, to the wonderful acting- I just love it!! 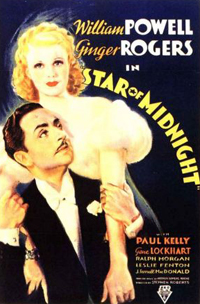 Star of Midnight (1935; William Powell and Ginger Rogers) When a dancer disappears from a theater, her former lover asks lawyer Clay Dalzell (Powell) to investigate, leading him on a trail of murder and deception.

Who knows- this could have been a discarded Thin Man plot- but honestly who cares- Bill and Ginger are fabulous, the mystery is good and I just love both of these actors! Plus Ginger’s outfits are gorgeous!!!

Again- this is a Thin Man type- plot setup- but again- who cares when Mr. Powell is solving the murder. I truly can say this one is really funny and actually has a better mystery plot than some of the Thin Mans (the later ones for sure). Jean and Bill play off so well together I love the attempts she uses to get him back; it leads to great humor! Just pure perfection!

My favorite Joan Crawford movie (and I am not a huge fan of hers). It’s got a touch of noir and a touch of melodrama and it’s so layered in its story telling- the plot could have been so thin but Otto Preminger gives the triangle a good complexity that makes you wonder if Daisy made the right choice. You may read my review here

A Letter to Three Wives (1949; Linda Darnell, Jeanne Crain, Ann Sothern) A woman who mails a letter to three women, telling them she has left town with one of their husband’s.

This movie is so intricate  for such a simple plot- for being an Oscar winner for best director and screenplay it’s sad the film has faded from the public with time. This has got a great script, great cast with again- layered characters- just as layered as those in All About Eve (which with this movie shares its writer/director; Joseph Mankiewicz) 1000% a must see!

And that’s where I’ll stop- on this post, anyways- as I really hope in the future I can add to this list. There are so many more classic movies- that aren’t big names- I still want to see and I just like to give things a chance- for you never know unless you try!

PS- To my Gov Teacher- This post is for you!

WANT THE MOVIES IN THE POST?! Amazon, or TCM SHOP  or KINO Lorber Studio Classics

8 thoughts on “Free For All Blogathon- Hidden Gems”