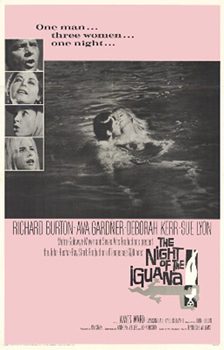 To be very honest I chose to do this (late) review of Night of the Iguana (so so sorry and again thanks for allowing the late posting!!!) for the Richard Burton Blogathon because 1- It was on TCM and 2- I don’t own any Burton Films. This was my first Burton film I had watched and while I didn’t love the movie- I did appreciate the performances.

Perhaps I didn’t like the movie because I’m not a super big fan of Tennessee Williams OR director John Huston (I don’t dislike Huston, I just don’t count him in my top favorites).

Night of the Iguana sees RB as Reverend Dr. T. Lawrence Shannon and the aftermath of his affair with a Sunday school teacher. The main narrative picks up two years after the event and Shannon is working as a tour bus driver in Mexico. One day after 17 year old Charlotte  Goodall (Sue Lyon) fails at seducing Shannon during a bus ride, he makes a stop at Costa Verde hotel in Mismaloya, thinking it is still run by his old friend, but soon finds his widow Maxine (Ava Gardner) running the place.

It is there, Shannon runs into two guests: painter Hannah Jelkes (Deborah Kerr) and her poet grandfather (Cyril Delevanti). During the night’s stay Shannon faces his inner demons head on, which Burton portrays in a very evoking emotional performance.

Despite the fact the actors are all great- I, much like those in 1964, don’t understand this movie. I really don’t get the whole iguana metaphor, in terms of figurative metaphor. It’s visually there on screen yes- but I really can’t connect it with Reverend Shannon (It’s probably because I’m reading too much into it?).

In today’s view- the plot and characters of this movie have gone on to become a topic of study, but as I mentioned, at the time of release no one really cared about the plot, as the real performances were occurring off camera with just-waiting-to-break scandals. Elizabeth Taylor was staying with Burton while on location, (just after her divorce from his manager) while Deborah Kerr’s husband, Peter Viertel, was an “old friend” of Ava Gardner’s. According to IMDB, John Huston gave the cast gold plated guns during the filming.

Anyways, I do want to see more of Richard Burton’s films because he is a distinctive actor and a fine performer. Maybe one day I will actually understand this movie’s sentiments and message- but for the first time around I didn’t quite grasp it. But for now, I am dying to see Anne of a Thousand Days because I am a Tudor-holic!!!

Here’s hoping in the future I will be willing to give this one another chance!!

WRITTEN FOR THE RICHARD BURTON  BLOGATHON

PICTURES: Wikipedia, Top poster IMDB- for the others

3 thoughts on “Night of the Iguana (1964)- Richard Burton Blogathon”