For Audrey’s birthday today, my entry will be about a film we all love: Charade (1963). Often called the ‘best Hitchcock film that Hitchcock never made’ Charade is a thriller that keeps you guessing until the very end.

Audrey plays Regina Reggie Lampert- a widow whose husband was wanted by a group of men. Because she is now the only link to her dead husband, she is then relentlessly chased by the group throughout the entire film with only a handsome but mysterious stranger to assist her. Normally we would find this creepy– but when that charming stranger is the one and only Cary Grant- its acceptable!!!!

Filmed on location in Paris, Charade provides a magnificent view of the city- many landmarks show up in the wide shots! Kind of makes you to stroll the streets with Cary and Audrey doesn’t it?

One aspect of Charade I find funny is every suit Cary wears gets messed up somehow- water gun, ice cream, a rooftop fight, the famous shower scene! Gotta love it! 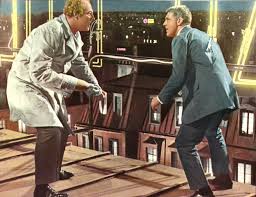 Behind the scenes, Audrey’s wardrobe was done by her favorite designer and close friend Hubert de Givenchy. Its also worth mentioning that Charade was to be Audrey’s only film with Cary Grant- and that fate had tried to pair them together twice before in both Roman Holiday and Sabrina– Cary would have played Joe Bradley and Linus Larrabee, respectively.

Another cool fact? Audrey was Cary’s 50th leading lady- and what a leading lady she is!!!

In the end, one movie was enough to make Audrey and Cary friends for life. They saw each other often after Charade and remained the best of friends. The two tried to make another film together, she wanted him for My Fair Lady, he wanted her for Father Goose, but it never came to fruition. Still, Cary proclaimed all he wanted “for Christmas is to make another picture with Audrey Hepburn.”

Charade is in the public domain which means its available on youtube for free! There’s no excuse- so go watch it today!

May the 4th be with you! (Replies-“And with your spirit!”)

Pictures from DVDbeaver, pintrest,  and wikipedia

This entry is for The Golden Boy Blogathon- A William Holden Celebration (click banner to read entries)- and may I begin by saying- I really do love William Holden- he is in my top 5 favorite when it comes to classic Hollywood actors!

Happy Birthday Bill, for you really are our Golden Boy!!!! Lots of love!– Emily ❤

AND now that that’s out of system, my choice to celebrate Bill is one of his most popular pictures, Sabrina (1954). Directed by Billy Wilder and also starring Humphrey Bogart and the lovely Audrey Hepburn, this film is as charming as it is enjoyable.

For most of us have probably already seen Sabrina, I’ll just give a brief summary, for those who haven’t David (our dear Bill) and Linus (Bogie) Larrabee are two rich brothers- David is a playboy and Linus is a work-o-holic. They have little in common, until their chauffeur’s daughter, Sabrina (lovely Audrey!)  returns from Paris and enchants them both with her new-found elegance and charm.

As I mentioned above, Mr. Holden plays the role of the younger and carefree brother of David. Audrey Hepburn’s character has a crush on him throughout most of the film, and well, who can blame her? We have a blonde Bill Holden here everyone- just look!

While the two characters clearly had crushes on each other, another romance was brewing behind the scenes, as life began to imitate art. Audrey and Bill began a love affair that would sadly end horribly for both. From Holden’s side- he was a married man- to Ardis Ankerson (Brenda Marshall, stage name). And for Audrey, during this time, through her good friend and Roman Holiday co-star Gregory Peck, she met Mel Ferrer, who would become her first husband.

However, the real reason why these two were never to be was the issue of children. Bill had a vasectomy and Audrey wanted nothing more than to become a mother and have a family. Once it became known that Bill couldn’t have anymore children, she broke it off, leaving him devastated.

Mr. Holden, remained married to Ardis until their divorce in 1971 . He never married again, but was the long-term partner of actress Stephanie Powers from 1972 to his death in 1981. However, according to many, Bill always called Audrey the love of his life! (Aww..)

Overall, Sabrina is definitely one of those movies Robert Osborne calls an essential. And it really is- not only for classic Hollywood film, but for all three main cast members as well. And while Bill and Audrey may not have ended up together in real life (spoiler for those who haven’t seen- or on film :-‘( ) but the time they did share together was certainly “magical”, as Bill put it! (NOTE- We Agree Bill! We Agree!! 😉 Very Magical Indeed)

Finally just for Fun here’s the tweet I sent out during the Valentine’s Day 2016 airing of Sabrina on TCM- it certainly speaks for itself, as TCM retweeted it!